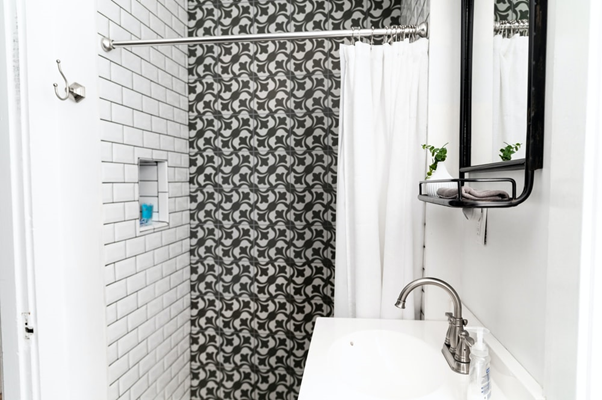 If yes, you know how annoying and frustrating it can be. Not just that, but if your shower rod keeps falling, it also poses a serious hazard.

You might have tightened the rod back in place, but it is possible for it to come crashing down again.

However, there’s nothing to worry about. If your shower rod keeps falling, there are many ways to prevent your shower curtain rod from falling while you’re showering.

Prevent Your Shower Curtain Rod from Falling – What You Can Do

You know how many people attach those little felt circles on chair legs to prevent them from scratching the floor?

These are basically furniture pads that are primarily designed for protecting the floor from chair scratches and marks.

A great thing about these is you can use them for your shower rod to prevent it from calling constantly. Simply stick one pad each on both ends of the shower curtain rod.

Then, adjust the curtain in a way that it’s a few inches longer than the shower itself. Hang the rod at a certain angle where one end is a bit higher than how you’d normally prefer. Slide it down until you see the rod hanging in a straight position.

Use a Quality Shower Curtain Rod

If your shower rod keeps falling, it could possibly be due to the fact that it’s of quite poor quality. In that case, the only solution is to invest in a quality, study curtain rod that sticks in one place.

Get a nice shower curtain rod with anti-slip properties that guarantees to never collapse. Such rods are also super easy to install. First, you get to adjust the length of the rod according to the space of the shower. Then, all you need to do is hold the rod with both hands and push it in a horizontal manner. Rotate it until it is a few inches longer than the opening. Pull the extending part in order to create some tension. Lastly, adjust the rod while ensuring that it’s perfectly suitable according to the horizontal position.

Often times, the problem isn’t with the rod, but with the shower curtain hooks, for instance. If your shower rod keeps falling, is it maybe because you keep tugging on the hooks to open and close the curtain?

It is actually quite possible that this constant tugging action has weakened the shower rod in your bathroom over time.

Take a look at the shower curtain hooks in your bathroom for possible issues. If they have rust on them or have become stuck in place, it’s time to change them! Get your hands on double glide, rust-resistant, quality metal shower curtain hooks with a double hook feature.

These are sturdy enough to hold and give support to a heavy shower rod and prevent it from falling or crashing down.

After all, everyone deserves to shower in peace without the fear of their shower rod falling on their head! Now that you know how to prevent your shower curtain rod from falling, you can shower without a care in the world!